As I laid in my bed, eyes wide open, the haunting thoughts raced around my head again…..

“What if I get fat while I’m sleeping”

“I ate way too much today, I know it”

I couldn’t take it anymore, the thoughts became too much so I peeled myself out of bed and creeped through my house and out the back door (careful not to wake my parents in the middle of the night). 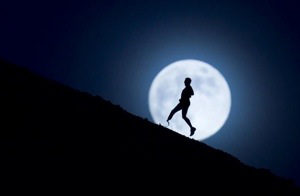 I wasn’t going to stop until my pedometer said I burned at least 700 calories.

As soon as my feet hit the grass I began to sprint…..Up the hill and right back down, as soon as I got back to where I started back up again I went.

No way was I going to be FAT!

The next day I didn’t eat as punishment for what happened the day before.

What could have possibly happened you ask?

All throughout my childhood, I was the skinny girl.

It started out as running……innocent enough, right?

I wanted to be a better athlete and in order to do that I thought I needed to lose weight, so I took up running.  I was 15 years old and “innocent” in my intentions of running for sports.   I began to enjoy running more and more but what really hooked me was how I felt when I was away from everything else, school, family, friends etc.

This is when it clicked, I could control my running and for the first time I had control over something in my life.  This quickly turned into me wanting to control something else in my life, food.   I can remember often going to school without eating, I packed a Chobani yogurt for lunch, would hide it in my sports bag and throw it away at home.  I would go days until I would allow myself to eat, or until I would be forced to eat to hide my obsession from my family or friends

This continued until my senior year of high school, when I finally shifted my focus.

That year, I had my first boyfriend, I was in the “popular” group at school, I was at the top of my class academically and one of the best athletes.

I was in control.

I had a car, friends, a job on the weekends, I was able to do pretty much whatever I wanted.

I did not feel that I needed to obsess over my body because I had control in so many different areas and I was accepted by so many people in my life.

Then I got to college…….A whole different monster of new experiences, strange emotions, immense freedom and complete lack of control.

I began feeling the pressure of preparing for my future, living on my own for the first time in my life, and falling short of where I thought I should be.

By this time my parents had gotten divorced, my family was spilt up and I felt that I was always choosing one over the other.  I was finally being challenged academically, to the point of not always reaching my goals.  I was on the volleyball team but I was far from the best, so many other girls were constantly beating me out for the starting spot.  My high school boyfriend had broken up with me due to distance and I could feel myself losing even more control.

But this is was a little different, I knew that in order to be good at school, volleyball and running, I had to eat.  I was studying exercise science and nutrition and I had learned the importance of food, so I came up with a strategy.

It was quite simple really, all I had to do was eat enough to survive and then exercise enough to not gain weight.

My days consisted of going to practice, heading straight to the gym to run on the treadmill, going to classes and thinking about what I was going to do for exercise that night. I would look around at my classmates and wonder how they could possibly be studying exercise physiology when they are all so out of shape.

When night time came, I would go to the gym again and then repeat that process the next day.  My eating was solely based on what I could burn off that day in the gym or what I needed to have for energy.  If I had class at 10 and practice at 3, I would eat a granola bar at 9 and then another at 2. This would give me the energy to get through what I needed to get through but would only take me about a half hour run to burn off on the treadmill.

I went from the girl with a million friends in high school to the weird girl who went to the gym every Friday and Saturday night.  I can remember seeing all my friends from high school come back from Freshman year with all these fun stories of going out and drinking with their friends at college and thinking to myself, “they might have friends but they also put on 15-20 pounds.”

I lost almost every friend that I ever made in college and many from high school because my life revolved around the eating disorder that I thought was going to make me a better person, student, athlete and eventually make me happier.

That high school anorexia that I thought I had put behind me transformed into compulsive exercise.

These unhealthy eating habits continued after college, coming in waves depending on what was happening in other areas of my life.

Sometimes months would go by of me eating completely “average.”

Sometimes months would go by of me starving myself in order to achieve what I thought was “happiness.”

Sometimes months would go by of me exercising in every minute of free time so that I did not gain weight.

I was stuck in a vicious cycle and I never put a thought to stopping or looking deeper into why I was this way.

My whole life changed the moment I realized that I have power over the choices I make.

I’m sorry to say that there was no pivotal moment that makes for a great profound ending, it was simply me realizing that this whole time I had been sacrificing for something that was never going to really get me where I wanted to be.  It took me realizing that every day I was waking up and choosing to punish myself and my body.

And, If I am the only one choosing to punish it.

Then, I am the only one that can choose to change it.

This was my life as a teenager and again as a young adult trying to navigate her way through High School College, competitive sports and the vicious social dynamic that exists for young girls.  I share this story with you not in search of pity or attention but rather as a way to give you a glimpse inside the mind of a teenage girl struggling to find her place in school, struggling to understand her body, and struggling to live in our sometimes-confusing world.

We all have things we wish we could go back and tell our younger selves, things we could change, moments we could do over.

Do more of this or that.

It’s so bizarre to look back and think of these moments because at the time, you thought were doing what was best for you or what you really wanted to do more than anything else.  Fortunately, our future self can use these experiences as lessons to teach our children in hopes that they don’t make the same mistakes or take the same paths we took.

As I go deeper with coaching and mentoring young female athletes I find myself reflecting back on the past decisions I made and the lessons I’ve learned.  I share with them my own experiences so they know that they are not alone and to empower them to choose differently when put in similar situations.

This story began in the midst of me dealing with an eating disorder that began when I was 15 years old.

As I write this today, I am 25 years old and still in the midst of dealing with an eating disorder.

Today, I choose not to let it control me.

EuroTrip 2017: 12 Days – 12 Revelations – 12 Commitments
[Coach Joe] The Sport Of Life: How An Athlete Reinvents Themselves After Sports