One For The Record Books

Rarely in life does a game have stakes as high as this.  Win and you get to live, lose and live out your days in the service of a tyrant.  Yet there they were, with 5 seconds left on the clock and the worst result imaginable on the verge of coming true.

The other team had been punishing them mercilessly the whole game.  With little to no players or hope left, one man had the courage to take everything upon himself to change their fate.

It was at that moment when the odds were completely stacked against them that pressure was at its highest.  Some people crumble with that kind of pressure.  The spotlight becomes too much and they eventually fail.

With 5 seconds left Mike knew he had no choice but to take things to a new level.  The pressure that reduced so many others to failure would be what elevated him to success, and ultimately saving his teammates and friends from sure doom.

Now everyone else started to believe it could be done.  Everyone went from doubters to absolute believers in just seconds, but Mike knew what was going to happen long before everyone else did. 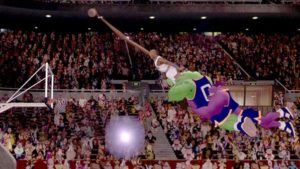 With one second left and the entire other team dragging at his body, Mike dramatically stretched his arm the length of half the court to dunk the ball and win his team the game.

Of course everyone knows this is the story of Space Jam, where Michael Jordan leads the Tune Squad, everyone’s favorite Looney Tunes, against the MonStars, a chemically enhanced team of aliens trying to steal the talents of famous NBA players.  On the surface the story sounds (slightly) far-fetched, but the lessons are crystal clear.

When the game is on the line, some people step up while others fall apart.

When everything is on the line, are you someone who demands the ball or are you hiding in your car out in the parking lot?

Pressure is a funny thing.  Scientifically, pressure is simply the effect of a force applied to a surface.  When talking about how an individual handles pressure, science means nothing and character means everything.

Anyone who has ever had to present in front of a large group of people or deliver before a hard deadline knows exactly what pressure is.  More specifically they know what pressure can do to you.

Recent research has shown that there are physical changes in the body when results and performances really matter the most.  In the book What Business Can Learn From Sport Psychology the authors discuss how the body shifts to either significantly increase or decrease performance.

Humans will instinctively react in what the authors refer to as either a “Challenge State” or a “Threat State”.  The terminology isn’t as important as what actually happens when this is going on.

In the performance enhancing “challenge state” your blood vessels dilate and blood is directed towards your muscles and your brain to help think and move in the most efficient way.  With a “threat state” the exact opposite happens and performance inevitably suffers.

Tipping The Odds In Your Favor

What determines whether your body goes into challenge or threat states is the most interesting part.  Before you can assess the situation, your brain subconsciously weighs the demands of the situation against the resources you have available to you.

The resources that matter most in this situation are:

All of these things are going to be subjective to the individual, which helps to explain why some people are cold-blooded killers when the moment calls for it.

My Space Jam example is one of triumph and succeeding in the face of tremendous pressure, but what can others who might not be on the same level as MJ learn from him?

What is it that separates Jordan from the rest of us mortals?

Mike clearly had thoroughly developed the resources above.  His self-confidence was through the roof, he believed he controlled the outcome to every game, and he was always thinking about winning and performing at his highest.  And how was it that he was able to get to this point?

3 Ways To Channel Your Inner “MJ”

It is the mindset that separates winners from losers and champions from chokers.  The ability to handle pressure can be developed and harnessed in sports and in life.  Practice these mental techniques and take your game to the next level.

When your moment comes, what will you do?